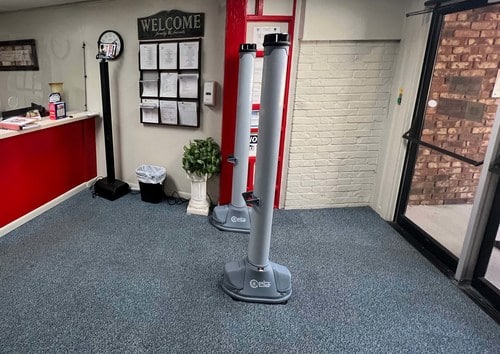 According to the company, the their detection systems have a slim footprint for screening as people enter the building. Traffic flow can continue as normal, without delays, for known adults and students. Adults and older children are the primary focus of detection on campus through a single point of entrance in the school’s front office. The campus is surrounded by 6′ chain-link perimeter fencing along with 2′ of barbed wire on it and all walk/traffic gates.

The system uses high definition metal detection combined with other sensors to understand the type, shape and size of metal in transit through the system to identify metallic threats immediately. The company says this screening can spot the difference between innocuous items (eg, keys, phones, metal water bottles) and legitimate hazards. Staff will be alerted if a potential threat has been detected.

“We wanted a system that passed the government standard for weapons detection, software to help our operations and Athena was it,” said Executive Director of the school, Russell Marino. “Athena was also very helpful in getting the system set up and our staff trained on the supporting software.”