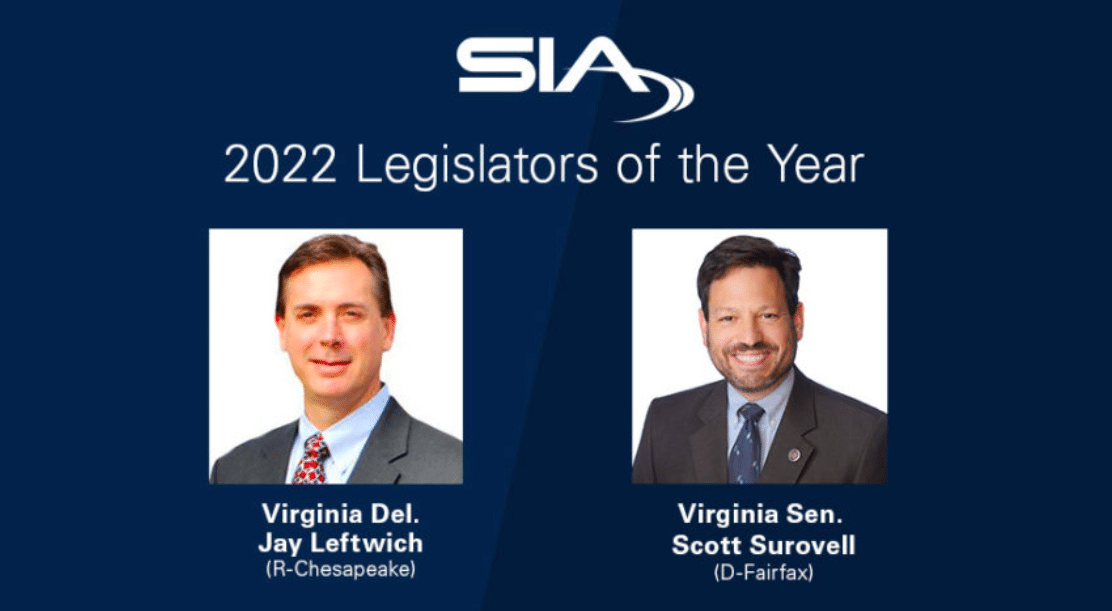 The Security Industry Association  has named Virginia Del. Jay Leftwich, Jr. (R-Chesapeake) and Virginia Sen. Scott Surovell (D-Fairfax) as the 2022 recipients of the SIA Legislator of the Year Award.

The 2022 awardees will be honored at the 2022 SIA GovSummit, SIA’s annual government security conference, taking place 24-25 May in Washington, D.C.

The SIA Legislator of the Year Award is presented annually to members of Congress and other elected officials who have demonstrated extraordinary leadership in advancing legislation and policies that encourage the effective use of technology solutions to enhance public safety and security and protect critical infrastructure.

In 2022, Sen. Surovell and Del. Leftwich authored landmark biometrics legislation for the state of Virginia (S.B. 741 and H.B. 1339) that was enacted in late April – a bipartisan measure to establish statewide rules for law enforcement use of facial recognition technology. The measure establishes key requirements and restrictions that address privacy, civil liberties and accuracy concerns while at the same time ensuring that appropriate technology tools can be used effectively to help solve crimes and assist citizens in need.

While this legislation was one of the most thoroughly debated bills during the session, it was also one of the most amended, incorporating input from both sides of the aisle that strengthened the measure and helped win majority support from both parties in each chamber. Continually stressing to their colleagues that that was the right thing to do strengthen public safety in Virginia, Surovell and Leftwich worked relentlessly throughout the legislative process to achieve its enactment.

Sen. Surovell was elected as Virginia’s 36th District state senator in November 2015 and sworn in on January 13, 2016, representing Fairfax, Prince William and Stafford counties and the towns of Occoquan, Dumfries and Quantico. He currently serves on the Transportation, Commerce and Labor, Judiciary, Privileges and Elections, and Rehabilitation and Social Services Committees and is the Senate Majority Caucus Vice Chair.

The SIA Legislator of the Year Award will be presented May 24 at a special award ceremony during SIA GovSummit. Each year, SIA GovSummit brings together government security leaders with private industry technologists for top-quality information sharing, networking and education on security topics affecting federal, state and local agencies.

Read more on this story on the SIA website HERE