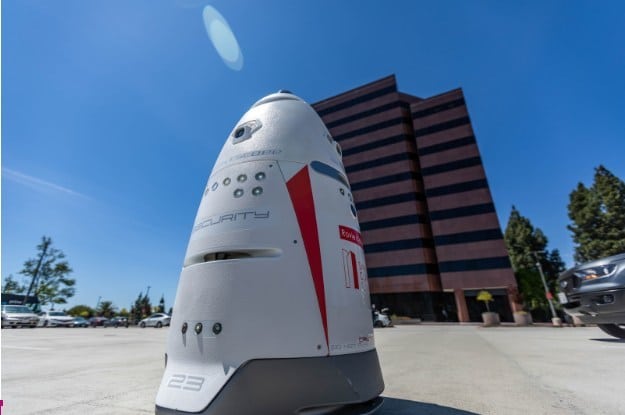 Knightscope Inc joined the NASDAQ exchange in the first week of January and its public statement is understood to be aimed at investors after six months.

Security robot developer Knightscope Inc. has revealed details of its investments so far in 2022 and spoken for the first time about some of its users..

Its announcement comes as a new market research report by MarketsandMarkets*, saying the global robot market was valued at $33.7 billion in 2021 and is set to reach $89.6 billion by 2027.

The report says: “The major drivers of the market include the growing adoption of security robots for commercial and residential applications, rising emphasis on security at national or regional levels, increasing investments and spending on defense by countries globally, and surging demand for autonomous systems that make real-time monitoring smarter.”

Prior to its NASDAQ listing, Knightscope had secured in excess of $120 million since 2013 from more than 35,000 investors. It was launched in April 2013 by William Santana Li and Stacy Dean Stephens, formed they said in response to the tragic shootings at Sandy Hook, the Boston bombings, and the attacks of 9/11.

Also following its NASDAQ listing Knightscope entered into a $100 million common stock purchase agreement with B. Riley Principal Capital. This commitment provides Knightscope with the right, without obligation, to sell and issue up to $100 million of its Class-A Common Stock within 24 months with some limitations.

Knightscope says it is expanding its management, engineering and diversity teams with the addition of four new executives and a clearer vision for the future.

Also starting this year, Knightscope announced a collaboration to protect a school district in Colorado saying it was “a state still with scars left by the mass shootings of Columbine and Aurora”.

“Being able to deliver real-time intelligence to law enforcement during a crisis is paramount to bringing a potentially tragic event to a conclusion faster and safer. Kids are our future, and we will do anything we can to help protect them,” the company wrote on its website.

It followed it up with a second contract with a private school in Florida, which is using the robots to patrol of parking lots as a part of the school’s autonomous security program to deter unauthorized access.

Knightscope also reports expansion in Texas, and its robots are now:

Additionally, it says there is interest from managers and developers in the commercial real estate (CRE) and biotech communities. Some have reportedly shown interest to enhance 24/7 security programs to protect laboratories, restaurants, businesses and entertainment venues.

Knightscope listed all of its new projects, which included in May, the first ASR appeared in Nashville, at a 10-storey car park and in California on SunsetStrip a hospital in cooperation with the local PD to monitor patient and visitor areas.

For more on the company and all the latest information, check out knightscope.com.

Other news stories which may interest you:

GXO enhances security and safety with high-tech DroneDog from Asylon